We have transitioned to http://www.bvartcc.com

Class B and Class C Operations

The most important fact here is that the VFR pilot is responsible for navigation and traffic avoidance in most classes of airspace. This is because in VMC the pilot better be able to navigate himself to the field. In the case of flight following a controller checks to ensure the pilot is pointed in the right direction issues traffic advisories and may provide vectors should the pilot go astray. Further if a pilot is given instructions by a controller that would put him/her in a cloudbank lets say, the pilot must advise the controller of that. The controller may advise a heading change or advise lower in a few miles or minutes. In the BRAVO its 3mi and clear of clouds and in CHARLIE its 3mi and 500 ft below 1000ft above (only few or scattered layers for VFR pilots) 2000ft from. The weather minimums that designate whether a field is VFR or IFR are 3SM visibility and a ceiling of 1000ft AGL.

ATC never has the luxury of having a flight strip to refer to. As a matter of fact there is no mechanism in order for pilots to file plans that ATC facilities will have copies of. All VFR flight plans, and there is no real life requirement for them, are filed with FSS but strips are not generated at appropriate ATC facilities. So when pilots check in with ATC for VFR flight following or a departure out of a Class C or B field most often after being provided with a squawk code they are entered into the NAS. What does this mean? The NAS is the National Airspace System and provides information about the aircraft and its intended destination. So when ATC looks at the data block they have information about the flight and type of aircraft. In PC we can accomplish this by adding remarks to the contact. The problem is that ONLY you will have the remarks field visible. If you hand off the aircraft to another controller youll have to let the controller know the intended destination. Any other VFR pilot who neither requests entry into the BRAVO or CHARLIE airspace nor the associated mode C veil may squawk 1200 or not have their transponders on at all. In real life a controller will see a weak primary target when an aircraft is not squawking at all. The same holds true here in the virtual world.

The conventions discussed here are so that controllers and pilots alike can experience "as real as it gets." Obviously requesting a VFR pilot to resend his/her flight plan on PC is another means of addressing what is discussed here but isnt REAL.

Pattern altitude at Logan is 1,500ft

The Boston Consolidated TRACON Airspace encompasses 40-80nm around Boston to a height of 14,000ft. Within this airspace is a "BRAVO," within which VFR flight operations receive special handling

Depicted below is a 30nm "mode c" ring, which is NOT a part of the BRAVO. Within this 30nm radius every aircraft must have an operational transponder.

The Boston Class B horizontal and vertical limits are 20nm to 7000ft.

From Logan to 8nm, the floor begins at the surface [SFC] and extends to 7,000 ft 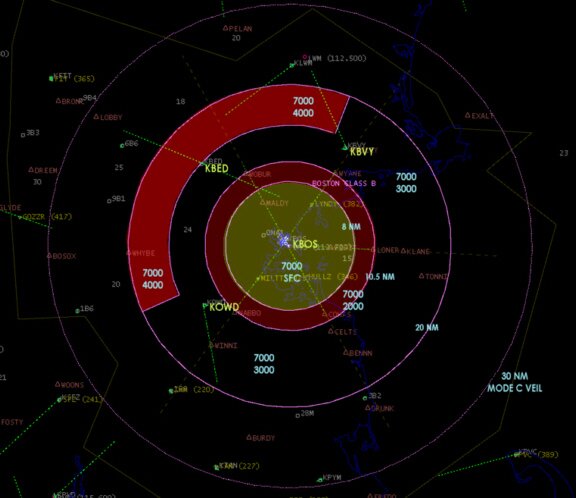 Clearance into the Class B

Landing other fields within Approachs sector

Transiting through the Class B

Within this airspace is a "CHARLIE," within which VFR flight operations receive special handling.

In many cases there is a 10mi ring around the Class C with a smaller, 5 mi ring closer to the primary airport which extends from the surface to most often 4000 AGL. An outer ring may have an irregular floor.

Landing at an airport within the Class C

Landing at an airport within the APPROACH sector / Transiting Flight following